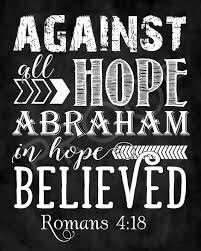 Romans 4:18-25 – “In hope against hope he believed, so that he might become a father of many nations according to that which had been spoken, “SO SHALL YOUR DESCENDANTS BE.” 19 Without becoming weak in faith he contemplated his own body, now as good as dead since he was about a hundred years old, and the deadness of Sarah’s womb; 20 yet, with respect to the promise of God, he did not waver in unbelief but grew strong in faith, giving glory to God, 21 and being fully assured that what God had promised, He was able also to perform. 22 Therefore IT WAS ALSO CREDITED TO HIM AS RIGHTEOUSNESS. 23 Now not for his sake only was it written that it was credited to him, 24 but for our sake also, to whom it will be credited, as those who believe in Him who raised Jesus our Lord from the dead, 25 He who was delivered over because of our transgressions, and was raised because of our justification.”  NASU

The words of verse eighteen have long been a source of incredible encouragement for me.  I don’t know about you, but I have been in situations where my hope was so strained that I felt I was hoping against hope as I prayed and sought the answer.  I knew that I knew that I had heard from God but everything in the natural seemed the reality of that word was impossible.  There were times that I felt I was going against the current, swimming upstream against rushing waters, and all alone in my position.  Those were very difficult times and possibly even more difficult than when I had an active enemy fighting against me.

I recall one situation in which the church I was leading, with my agreement, we were making plans to build a Family Life Center with a gymnasium.  There was excitement within the church and the anticipation of this new step was favorably received by most, if not all the church.  Then, the LORD threw a monkey-wrench in the plans, at least from my perspective.  We were in a revival and had a planned business meeting to have an official vote on the proposal for the new structure.  As I prayed prior to the Sunday service, the Holy Spirit arrested me, and I wrote down about three-pages as to why this decision was wrong and that we should build a new sanctuary instead.  Among the other things I sensed in my heart was the message we were conveying to the community and the lost in our actions.

Please understand, I was not opposed to a Family Life Center with a gym. I loved and love athletics and recreation.  Our softball team on which I played was playing in two leagues.  I loved golf and played basketball whenever I had the opportunity.  The church knew of my love for hunting and fishing and all outdoor activities.  So, this was a departure and a shift that would blindside them and could cost me the favor of the entire church.  I went to the church board prior to the service and read my notes to them.  They were in shock. Stunned, they said, “the only thing we can suggest is that you tell the entire church what you just told us.”  I did and asked the church to delay any decisions for thirty-days.  There was rumbling and grumbling in the congregation and there were others who were confused but willing to pray.  I was risking everything in going against the expressed desire of the majority.

Immediately after the service, there was an effort to get up a petition to have a vote on removing me from being their pastor.  One of the most influential men in the church told that resistance, “No!”  He told them, “I trust God and I trust the pastor.  If he is right, God will change our hearts and if he is wrong, God will change his.”  I did not find that out until after the month had passed. Therefore, I spent thirty-days with both a sense of inner confidence and trepidation as to what the outcome would be.  I felt, at times, like I was hoping against hope.  I had stepped out on the directive of God and knew that my minister there was possibly in jeopardy.

At the end of thirty-days or about four-weeks later we met, and God had turned the hearts of the people and they voted unanimously to build a new worship center.  I dropped another bombshell on them telling them the second part of God’s directive.  We were to build the church debt free.  We planned to receive an offering in another, thirty-days and I told them I believed God for an amount that I am sure shocked them.  During that month, the Holy Spirit began to move on hearts and people came to me stating they believed God was going to give us more than I had projected.  He did and then in ninety-days, we received another offering and paid the debt in full for the new sanctuary.  My hope was confirmed and although there were times, I almost slipped in my confidence, the Holy Spirit helped me stand in Hope against Hope and see His directive become a reality.

I encourage you to never give up the Hope of what God has Promised you and Spoken to your heart.  Rejoice in the Lord and in the Power of His Might.  Have a fantastic day!