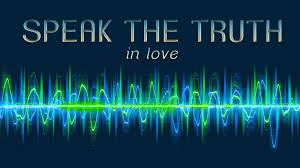 Ephesians 4:25 – “Therefore, laying aside falsehood, SPEAK TRUTH EACH ONE of you WITH HIS NEIGHBOR, for we are members of one another.” NASU

I don’t want to get political or go on an all-out attack on religious hypocrisy but will say that what we need in this present world is men and women of THE TRUTH.  Paul tells the Ephesian Church that they are to “lay aside” FALSEHOOD and “speak the truth.”  He reminds them and us that we are not isolated from each other but as members of both the human race and the family of God we are part of the same fabric and while we sometimes are guilty of lying to ourselves or distorting reality in our minds we do not practice that regularly, at least I hope we do not.

My grandfather and father always told me, “Tell the truth it is easier to remember than a lie.”  They usually told me that when I attempted to pull the wool over on their eyes and they saw through it with amazing clarity and regularity.  Neither would tolerate laziness or dishonesty and were truthful to a fault and even if telling the truth brought them personal or financial difficulty.  They believed and so do I that “honesty” is not just the best policy it is the “only policy.”  If we are truthful then we do not have to worry about being exposed and that in itself brings a certain sense of peace and security to the heart and mind.  We have all known people who it seems would climb a tree to tell a lie when they could have stood on the ground and told the truth.

My children know that I told them, “If you lie to me and I catch you it will be far worse than if you tell me the truth.”  If they remember they can recall sometimes when they told me the truth and escaped punishment and times when they didn’t and the punishment or correction was stepped up a notch.  If we encounter someone who tells us untruths on a regular basis, no matter how hard we try not to label or characterize them as being a liar we still do so, at least in the back of our minds and it affects our relationship or prevents us developing one that is positive.  No one wants to do business with a person that distorts the truth or facts.  No one would want to sit under a preacher who told fabrications.  As a friend of mine had a member of his congregation asked him, “Pastor was that story you told the truth or were you just preaching?”  What a statement and while she may not have meant it as it came across that she would even entertain it is a tragedy.

You do not want anyone to tell you anything but the truth so why practice telling others something that is not truthful?  You would not want your doctor to tell you something that was not true regarding your health because that could cost you your life.  You would not want your banker or financial adviser to misrepresent your finances that might cost you your possessions.  In life (all of it) let’s be PEOPLE OF THE TRUTH!

May God bless you as you go through your day!