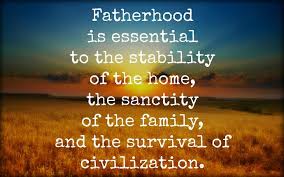 Ephesians 6:4 – “And you, fathers, do not provoke your children to wrath, but bring them up in the training and admonition of the Lord.” NKJV

Colossians 3:21 – “Fathers, do not exasperate your children, so that they will not lose heart.” NASU

Proverbs 22:6 – “Train up a child in the way he should go, and when he is old he will not depart from it.” NKJV

Since I was a child, much has changed regarding the accepted norm in child rearing and whose responsibility it is to train the child.  Scores of books have been written about discipline or the lack thereof, about spanking or the supposed damage that does, etc.  My dad was a disciplinarian. He could not quote a lot of Bible verses, but he did know a couple and practiced them.  He knew, Proverbs 13:24 – “He who spares his rod hates his son, but he who loves him disciplines him promptly.” NKJV.  He knew, Proverbs 23:13-14 – “Withhold not correction from the child: for if thou beatest him with the rod, he shall not die. 14 Thou shalt beat him with the rod, and shalt deliver his soul from hell.” KJV

He knew, believed, and practiced those while teaching me discipline, the value of giving my word and honoring it, respect for my elders, doing what is right even when no one is looking, treating women with respect and dignity and giving a full day’s work for a day’s wage. Those are things that are so a part of my makeup that they are part of who I am. He applied the “rod” more than once to my young anatomy and to this day I am grateful that he loved me enough to discipline me and keep me heading in the right direction.

God wants fathers to both “train” and “admonish” their children.  Training has to do with actions.  It has to do with teaching them “how to” and in some cases “how not to” whereas; admonition has to do with “words”, what you say and how you say it. I’ve heard fathers constantly tell their children that they were stupid, worthless and would never amount to anything.  In fact, not to get too close to home but I witnessed a relative tell his son & daughter how worthless they were from the time they could walk.  He told his daughter she would be a “whore”, a “tramp”, a “slut” and his son that he would never amount to anything.  Both children, now grown, have major problems and both have looked to me through the years in times of trouble as a haven to which we can run, often too late.

My dad, though a disciplinarian always instilled in us that we could do anything that we set our hearts and heads to. He had very little education but knew how to do more things than most men I know, as could my grandfather. His administering of punishment or discipline was not out of anger or because he was the adult and we were the child and he could, but because he wanted to prevent us from taking the wrong course in life.  I know that every child is different and differing types of discipline works with different children but for me, he had the right course of action, I needed a firm hand.

I’ve been told that I have a “mother’s love” for my children because of the great love that I demonstrate toward them. Yet, I respond to that saying, “No, I think that you misunderstand the love that most men have for their children, I just express it a little differently than many.” A true father has no greater desire than to see his children grow up and become responsible, productive members of society.  If he is a Christian father, he can have no greater joy than to see them serve the Lord and then raise their children in the fear and admonition of the Lord.

One of my closest high school friends father drank heavily and would come in and beat his wife. My friend, by the time he was 15 could take it no longer and on numerous occasions would physically fight his drunk father to protect his mother. His father provoked him to anger and though he recognized him as his biological father he held no respect for him and later when he had turned to the Lord it was almost impossible for the son to accept the change, because of the history.  I raised my sons with a firm hand but always tried to communicate to them that what I was doing was out of my love for them and attempted to teach them not only what was going to happen but why and what the objective was for their lives.  Both, are great young men today, serving the Lord and loving their dad (me) as I love them.

God disciplines us because He loves us not because He doesn’t.  Sometimes, He just speaks, and a word is enough. Sometimes, He allows us to fall into our own pit for a time because a word was not enough. We are sometimes like the little lamb that will go running around everywhere without discipline and finally fall off the cliff onto a ledge. We cannot get off by ourselves and the wise shepherd will sometimes allow that little lamb to stay there for an extended period of time, while closely watching and carefully guarding the lamb and then will pick it up from the ledge and the shepherds have been known to break the little lamb’s leg and then carry it on his shoulders until it is healed before allowing it to run free again. This time, the lamb responds to the voice of the shepherd!  I’m not saying God is going to break our legs, but He will let is lay on the ledge for a time, so we can see the folly of our ways and then pick us up and nurture us back to health.

Fathers if you have a problem with anger, your children will too!  If you discipline in anger, they will not get the message you truly want to convey unless it is you want to hurt them. If you discipline, admonish, nurture and train them in the Love of the Lord, then when they are old they will not depart from it.  Your job is important but not more important than your family.  Your ministry is important but not more important than your family.  God has placed under your care and keeping, children (if you are a parent) and holds you accountable for their nurture, admonition, discipline, and training.

You may spank or not spank that’s between you and God, but you are responsible for helping to shape the will of that child at a very early age so that the child will grow up responsible and learn the love and discipline of the Lord from his or her father. Of course, mothers are vital to this but I’m speaking to the fathers.  Children need their fathers in the home not just on their birth certificate.  Men, be a father don’t just become someone who sires children.

Blessings as you go through your day!