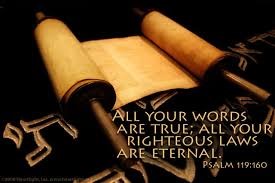 Psalm 119:160 – “The sum of Your word is truth, and every one of Your righteous ordinances is everlasting.”  NASU

A number of years ago I had a dear child of God declare to me, “Jesus said it, I believe it, and that makes it so.”  I did not challenge the individual at that time but have thought about that statement many times through the years.  Is something TRUE because Jesus said it and/or because we believe it?  I would contend that a word is not TRUE because God says it but that God says it because it is TRUE!  I would qualify that by saying, God would NEVER say it if it were not true!  I am not trying to split hairs but I would also contend that just because we believe something has little to do with its veracity.  Many people have and do believe things that are quite wrong so that statement of this person may give us comfort but it is erroneous in its beginning and therefore would end up in an erroneous destination.

The Bible tells us to be people capable of giving ‘reason’ for the Hope that is within us and to be able to do so with calmness, reason, and do so grounded in truth.  Jesus’ declaration to the Father that YOUR WORD IS TRUTH is a basis and foundation for us.  Paul instructed Timothy to ‘rightly handle the Word of Truth’ in his ministry and life.  When we conclude that God’s Word is TRUTH then we have a foundation that is unshakable to build our lives and faith upon.  It is not just because something is in the Bible that we depend on but we depend on the truth that it is in the Bible because it is TRUTH that we anchor our hope and faith upon.

I have complete confidence in God and His Word and believe that God only speaks what is TRUE.  I realize that some will say that I’m splitting hairs here and maybe so but in dealing with unbelievers, atheist, and agnostics my approach has had more impact on them than the declaration that I was told years ago.  When I approach it from the point of fact that God only speaks what is RIGHT and TRUE there has been a greater openness to my argument than when I simply declare IT IS IN THE BIBLE.  If a person does not believe the Bible, to begin with, that declaration has little value but when you begin to present your argument using factual, scientific reason that what God has said is TRUE and then rise to the point that God only speaks what IS TRUE there is more ground to reason with them.

In fact, when I came to this way of thinking my faith grew stronger and my confidence in God became more pronounced.  I have found that it has helped in some incredibly difficult time and times when everything around me was designed and directed at shipwrecking my confidence in God.  The foundational conviction that God ONLY SPEAKS WHAT IS TRUE has provided me a foundational rock that the events of life could not shake.

Maybe this helps you and if it does wonderful.  I only ask that you consider this point of view as you face the many events of life and as you reach out to those who do not believe.  May God be with you as you go through your day!