Proverbs 14:34 – “Righteousness exalts a nation, But sin is a reproach to any people.”  NKJV

Sometimes we have to put on multiple hats and delve into arenas other than strictly the spiritual.  Therefore, I feel compelled to ask the question, “Have we lost our way, as a nation and/or as individuals in America?”  It is not a trivial question to me and as I consider where we are as a nation and a people I am compelled to turn to scripture for answers.  Our text verse gives us incredible clarity regarding national righteousness or sinfulness.  I have heard many sermons declaring that America is under the judgment of God and doomed.  I won’t argue that but would suggest that as with Jonah and Nineveh if a nation or people repents God stays His judgment.  Therefore, the question is serious for us as a nation and as individuals.

In Proverbs 14:33, we read, “Wisdom rests in the heart of him who has understanding, but what is in the heart of fools is made known.”  As I consider the attitude reflected in this nation politically and in interpersonal relationships, I cannot overlook the evidence of evil being present in our society and government. We are a nation that was founded on biblical and moral principles and the founding fathers acknowledged the importance of God’s guidance and the necessity of following the principles of His word.  They considered those vital foundation stones for the Republic.

I am concerned that we, as a people, may have become unmoored from our moral pillars and are drifting on the sea of life without a foundation.  I deeply appreciate and respect the concern for lives, all lives.  Many are placing the lives of various ethnicities above others and there is the demand that women’s rights are violated if we do not allow abortion on demand.  I contend that if any society places the life of one segment over that of another they have departed from and lost sight of a basic principle in both the Bible and the American Constitution.  God values LIFE and so should we!

As a Christian, a preacher, an American, and a patriot, I unashamedly take a firm stand on the side of the rights of the unborn in the womb.  Many in today’s society and even some in the church have allowed themselves to become so desensitized to this issue they have rejected any consideration of that “fetus” being a “living human being” in the womb.  Some consider that entity or life in the womb nothing more than a mass of tissue or a blob of meaninglessness without value or viability.  Never mind that child in the womb has developed body parts, has a heartbeat, and can feel pain.

Sadly, to many that is unimportant and I suspect that if they allowed themselves to think of that “fetus” as a “baby” they would find it impossible to sleep at night.  It is a serious issue and not one I investigate casually.  When I look at judgment on cities or nations Sodom & Gomorrah are unavoidable and there is no trace of their existence today.  Jesus spoke to the cities of Chorazin & Bethsaida reminding them of their blessings and their sin and said that the cities of Tyre & Sidon would have repented long ago had they seen what Chorazin & Bethsaida had seen.  In this nation we have seen greatness like no other nation on earth and as a people are among the most blessed in history.  Therefore, the question is important.

Our first president, George Washington, in his inaugural address on April 30, 1789, spoke of the inspiration that came through the love of country and the reality that the connection between virtue and happiness was indisputable.  He spoke of duty, success, and honest governmental policy and how we could not separate our success as a nation from virtue and honesty.  He said, “Since we ought to be no less persuaded that the propitious smiles of Heaven, can never be expected on a nation that disregards the eternal rules of order and right, which Heaven itself has ordained: and since the preservation of the sacred fire of liberty, and destiny of the republican model of government, are justly considered as deeply, perhaps finally staked, on the experiment entrusted to the hands of the American people.”  He, they, and we should or must recognize that if we violate God’s basic moral principles as a nation or as individuals, we will fail without His smile on us.

Over 60 MILLION babies have been aborted in America since 1973.  Consider that the populations of Burma, South Korea, and South Africa are individually less than that.  We have killed enough babies to populate entire countries. That is alarming and frightening!

America was living under bondage, in a great sense, at the time of the American Revolution.  America developed spiritual faith in bondage and from faith came incredible courage.  As courage took root liberty resulted and in liberty, America experienced abundance.  As America became rich in abundance symptoms of selfishness sprang up and out of selfishness and abundance came complacency, morally, spiritually, and politically.  Complacency produced apathy and has resulted in moral decay.  Out of moral decay came the fruit of dependency on man, ability, and government, and dependency has resulted in a return to bondage.  We, I fear, have come full circle in America and that is why I ask the question.

The nation of Uganda celebrated its 50th anniversary of independence from Britain and in 2012 the president stood before his nation and the word and repented of his personal sins and the sins of the nation.  Do you remember Idi Amin?  President of that nation from 1971-79 and his rule was characterized by incredibly human rights violations and genocide.  It is estimated that as many as 1/2 MILLION people were slaughtered under his direction.  The economy of the nation was destroyed, and the entire country was in shambles.  Today, that is not the same picture because a leader took personal responsibility and led the nation according to 2 Chronicles 7:14 in repentance and prayer.

I hear the Spirit of God saying, “It is up to you America and Americans!”  We must change course personally if we have drifted from God and we must change course nationally if we are to enjoy the smiles of God on us today.  If we abandon God’s precepts and principles, we are treading on dangerous ground.  I wonder what our founding fathers and the preachers of that day would say if they saw us now.

May the Smiles of Heaven be in your life and labors.  Blessings abundant! 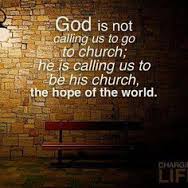 In picking up the thought of SEEING the Word of God and our being CALLED OUT the question comes to mind, “Called out to do what?”   Are we called to “be holy”?  Absolutely.  Are we called out to “go to heaven”?  We will, but that is not why you were saved that is a benefit of salvation.  You were saved for a divine purpose and have a divine destiny here on this planet. God has a Plan!  One of the greatest needs of this hour is for individuals and churches to know God’s Plan and understand Our Purpose.  I am totally convinced God has a Plan and Purpose for here and now for each of us.  He has called us out to prepare and equip us.  He has given us the full armor of God which in a real sense is Jesus.  It is the time that the Body of Christ take up our weapons and launch into the battle.

If your mentality is “Escapism” or “Apostate” you will be fearful and may find yourself just trying to “hold on” and “hold-out” unto the end.  That is a wrong mentality and I have good news, the Gates of Hell cannot stop you armed with Jesus or armed in Jesus!  We are not those who are to be on the defensive.  We are not to simply “hold the fort” we are to GO THEREFORE!  I am praying for the Church to develop an Offensive Mentality.  NO, not be offensive but go on offense.  Jesus is coming back for His Bride and she is not an undeveloped little girl or an emaciated old woman, she is a radiant bride full of life and vigor.  The Bride He is returning for is Glorious!

Isaiah 42:4 gives something interesting, “God has called the generations from the beginning…”  The Generations!  I believe that God has designed things so that in each generation He would move and execute His plan unique to that generation always moving toward the Ultimate Goal.  Tragically too many churches and believers are simply trying to “wait it out” until Jesus comes rather than “becoming” and “being” what He has declared us to be.  We have a unique place in history for I believe this is the generation that will usher in the greatest move of God mankind has ever witnessed and we will see the Restored Church rise up and reap the harvest of the End Times.

If we understand that a generation is a “single step in the line of descent from an ancestor”.  We have a destiny that God has purposed for each of us.  Many, like me, have had a sense of destiny all their lives and that sense of destiny keeps me moving forward. The devil has tried numerous times to stop me.  As a child, I was sickly and the doctors did not think I would live to adulthood, but I did.  There were times in my youth that I had brushes with death but didn’t die.  In Vietnam, on several occasions, I can pinpoint specific times when God did something miraculous to keep me out of harm’s way.  As an adult, I have had the sentence of death on me and God healed or delivered me.  If we realize our Purpose and embrace our Destiny we must become people of prayer and out of that relationship I believe will become people of power.  In that state, we will become voices that can be called nothing less than prophetic as we speak His truth and light to the world.  That will make us Radical Christians and we will learn to be the Glorious Church Jesus came to build exercising dominion and power over the powers of darkness.

So, believer, allow the Holy Spirit to birth in your heart sense of destiny and purpose and allow the visions of God birthed in your heart to become outworkings of your life.  God bless you as you embark on your new journey in Christ!