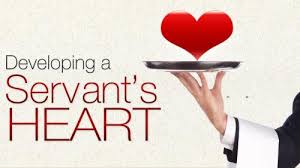 Mark 10:41-45 – “Hearing this, the ten began to feel indignant with James and John. 42 Calling them to Himself, Jesus said to them, “You know that those who are recognized as rulers of the Gentiles lord it over them; and their great men exercise authority over them.  43 “But it is not this way among you, but whoever wishes to become great among you shall be your servant;  44 and whoever wishes to be first among you shall be slave of all.  45 “For even the Son of Man did not come to be served, but to serve, and to give His life a ransom for many.”  NASU

This comes out of one of the many examples that demonstrate the earthly mindset of the disciples.  They truly believed that Jesus would set up His earthly kingdom in the flesh and they would hold high positions in that kingdom.  It took a long time for them to transition from the temporal to the eternal and in this case, James and John were asking for prime positions and the others got jealous and perturbed at them over it.  A division was beginning to develop and Jesus took control of the situation immediately and in this passage brings us a message that Every Potential Leader must hear.

Jesus contrasted His Kingdom to that of the earthly kingdoms of men and the drive for power and position in earthly government and power structures.  He told them, “This is not the way we operate….”   He went on to tell them that IF you want to lead then you have to serve and identified Himself as the prime example.  In the most simple of terms, Jesus identified that an immediate disqualification for a person seeking leadership was one who Would Not or Did Not serve!  That is true no matter if it is spiritual, church government, family structure, business, or politics.  It is LIFE!

The only real way a person can ever receive the Power of God is to develop a “Servant’s Heart” else that power would corrupt and be abused.  It seems that every time I’ve ever talked to God about “Spiritual Power” He talks to me about “Spiritual Purity.”  Every time I’ve talked to Him about a greater role in the Kingdom He talks to me about becoming more of a servant.  I’ve learned that promotion in God should only come to those with a Servant’s Heart.  A Pastor who does not have a servant’s heart will seek to develop an ecumenical hierarchy that elevates him and lowers those whom he or she is to serve.

Jesus demonstrated His willingness to serve on so many occasions but none as great as His willingness to go to the Cross for us.  He washed the disciple’s feet, cared for the masses, looked out for the poor, healed the sick, caused the blind to see, and made the lame to walk but His Sacrifice on the Cross is the ultimate demonstration of service and love!  May God help us to develop a servant’s heart so that we might be of greater and greater use in the Kingdom.