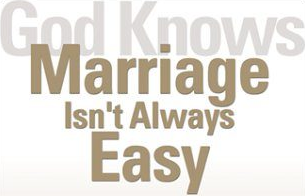 Genesis 2:23-24 – “The man said, “This is now bone of my bones, And flesh of my flesh; She shall be called Woman, Because she was taken out of Man.” 24 For this reason a man shall leave his father and his mother, and be joined to his wife; and they shall become one flesh.”  NASU

Not too long back I was engaged in ‘Marriage Counseling’ by osmosis for some friends.  By that I mean, I did not intend to be involved and they did not initially seek my counsel but through a series of events, it happened.  The man has been a friend of mine for a long time and I’ve known his wife a much shorter time so I deemed it likely that she would view me as taking his side in any dispute and desired to stay outside the conflict.

Over time I had observed that it seemed that no matter what he did or said she was corrective and critical.  If he washed a dish, he either did not get the right one or put it in the wrong place. If he spoke about a political event or topic he was told that he was wrong and even when he was virtually quoting what she had said he was corrected or criticized for his statements.  If he drove the car, he was in the wrong land, going too fast/slow, etc.  It was one of those situations where it appeared that no matter what he did or said it was wrong and needed to be corrected.  I watched over several years as he transitioned from taking it passively and trying to do what she said into a confrontational individual and would blow up when she became corrective and/or critical.  He told me privately and then in a counseling session, “It doesn’t matter what I do it is wrong so why try?”  He even said, “I guess if I died, I’d do that wrong too.” She responded, “You probably would because you do not pay attention to detail.”  I was stunned by both comments.

I am not trying to say she was the total problem or that he was truly a victim but I’m saying that their relationship had deteriorated to one of antagonism and all the signs of a divorce were evident.  On one occasion I heard her tell him that when he finished a dish or cup to place it on the cabinet not in the sink.  Later I observed him taking a cup and placing it on the cabinet and she said, “Why didn’t you put that in the sink?  You just want to make more work for me.”  He shook his head, looked at me, sighed and walked away.  I probably should have stopped but I didn’t and said, “Just the other day I heard you tell him to put any dish on the cabinet, not in the sink and he did but you corrected him telling him the opposite.”  She said, “Well this time I wanted it in the sink.”  Still not following my own rule of staying out of other people’s business I asked, “How could he have known that? He was doing what you had previously told him to do.”  I continued and suggested that she might be overly critical of him to which she said, “I’m never critical of anyone.”

I know a couple of people who work with her and in her mind, she believes that everyone at work likes her approach to things and never considers her corrective comments as criticism.  Both have told me that people at work avoid her because they consider her to be very contentious and critical no matter what they do.  So, there was a real problem in that she was being critical but could not see it.  The additional problem was he had begun to develop a contentious attitude and when you were around them you could cut the tension with a knife.

The Bible says in Proverbs 21:19 – “It is better to live in a desert land Than with a contentious and vexing woman.” NASU It also declares in Proverbs 27:15 – “A constant dripping on a day of steady rain And a contentious woman are alike…”   NASU Marriage is difficult enough without contentiousness on the part of either partner.  We also read in 1 Peter 3:7 – “You husbands in the same way, live with your wives in an understanding way, as with someone weaker, since she is a woman; and show her honor as a fellow heir of the grace of life, so that your prayers will not be hindered.” NASU Paul gives counsel in Ephesians 5:25-33 – “Husbands, love your wives, just as Christ also loved the church and gave Himself up for her, 26 so that He might sanctify her, having cleansed her by the washing of water with the word, 27 that He might present to Himself the church in all her glory, having no spot or wrinkle or any such thing; but that she would be holy and blameless. 28 So husbands ought also to love their own wives as their own bodies. He who loves his own wife loves himself; 29 for no one ever hated his own flesh, but nourishes and cherishes it, just as Christ also does the church, 30 because we are members of His body. 31 FOR THIS REASON A MAN SHALL LEAVE HIS FATHER AND MOTHER AND SHALL BE JOINED TO HIS WIFE, AND THE TWO SHALL BECOME ONE FLESH. 32 This mystery is great; but I am speaking with reference to Christ and the church. 33 Nevertheless, each individual among you also is to love his own wife even as himself, and the wife must see to it that she respects her husband.” NASU

What am I saying?  The wife, in this case, was practicing criticism and her criticism was driving a wedge in their relationship.  The husband, in this case, had developed an attitude and was no longer following the Biblical mandate and directive so the wedge was further enhanced by his attitude and actions.  MARRIAGE is the joining of two individuals in a spiritual, emotional, and physical relationship wherein God’s eyes and in a real sense becomes ONE UNIT.  Anything short of that is a tragedy and will never afford the beauty that is a Marriage made in Heaven and a Biblical one.

If you are as the wife and critical of your spouse on virtually everything allow the Holy Spirit to reveal your inappropriate words and actions!  If you are as the husband and have allowed an attitude that is unhealthy and unbiblical to develop allow the Holy Spirit to reveal the inappropriateness of this too!  You loved each other in the beginning and probably still do.  You want a happy and healthy marriage and that is not always an easy prize to achieve.  My question is – “How much is it worth to have it?”  Is it worth developing a thicker skin to criticism?   Is it worth demonstrating kindness and love instead of “defending yourself” by reciprocal actions and words?  WHAT IS IT WORTH?

You and only you can answer that so I urge you to seek the face of the Lord and allow the Holy Spirit to restore what the devil is trying to steal.

Blessings as you go through your day.