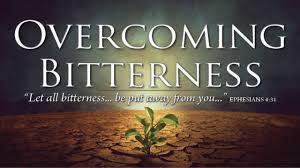 Ephesians 4:29-32 – “Let no unwholesome word proceed from your mouth, but only such a word as is good for edification according to the need of the moment, so that it will give grace to those who hear. 30 Do not grieve the Holy Spirit of God, by whom you were sealed for the day of redemption. 31 Let all bitterness and wrath and anger and clamor and slander be put away from you, along with all malice. 32 Be kind to one another, tender-hearted, forgiving each other, just as God in Christ also has forgiven you.”

Ephesians 5:1 – “Therefore be imitators of God, as beloved children; 2 and walk in love, just as Christ also loved you and gave Himself up for us, an offering and a sacrifice to God as a fragrant aroma.”  NASU

What do we have to PUT AWAY as Christians?  What are those things that the Holy Spirit identified through the apostle Paul that we, as believers, are responsible for dealing with in our lives?

THE NUMBER ONE THING IS BITTERNESS.

That is numero uno!  It is the big boy of things that we must deal with in our lives if we are to move into the Grace of God and mature as believers.  I would suggest to you that ‘bitterness’ is less about what you DO than what you DO WITH.   Bitterness is truthfully a way of being.  It is something that has descended so deeply inside our beings that it is rooted in the core of who we are.  It is a state or a constant that too many either do not know exists or refuse to acknowledge.

Bitterness can be tied to an experience and that experience may have happened years earlier and likely did because now the hurt, disappointment, pain has become full-blown BITTERNESS!  Remember that Paul is speaking to believers!  I know that is difficult for some but he is speaking to believers who ‘still have problems’.  He is speaking to people that have brought some ugly baggage with them into the Christian experience.  He could have said, “Hold it!  You brought some things with you that are part of the old life and you are still bitter about them.’  Things that have become such an ingrained part of our being that we often do not even know they are there.  Big or small it was something that you never forgot or let go of and now it has taken root deep inside of who you are and has to be dealt with.   Remember what the Bible says about a ‘root of bitterness’ and it springs up and ‘many are defiled.’

Research has proven that ‘bitterness’ can release poisons into the bloodstream that can be measured in a test tube and those poisons can actually bring on sickness and disease.  We expect that of sin or what we identify as sin but do we really understand the danger of bitterness?

Bitterness never remains buried it has a way of being released to the tongue!  We see it in ‘wrath’ – flying off the handle and rage and it comes from a fire that burns deep inside.  We see it in ‘anger’ – you can see it in the eyes, by the body language but they are nice people and don’t let it out but it is there.  We see it in ‘clamor’ – uncontrolled shouting, loud arguing and no control over the tongue.  They will beat you up verbally.  We see it in ‘evil speaking’ – deliberately spreading gossip and harmful stories about people to hurt them.  In the Greek, it is called ‘blasphemy’.   We see it in ‘malice’ – a settle determination to hurt others.  They may have hurt you and you are ‘getting even.’

Paul says – – God says – – PUT IT AWAY!  You do not have to be bound by bitterness Jesus died for your victory and freedom!

May God bless you as you go through your day!