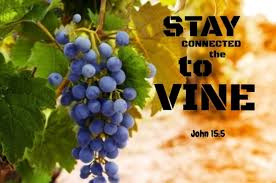 In His discourse about being the Vine and the Father the vinedresser, Jesus informed those hearing that He expected His followers to “bear fruit” and if there was no “fruit bearing” that branch would be taken away.  He talked about the cleansing of the branches by pruning and told those listening that they were clean already because of His Word.  He identified that there could be no fruit except it come from the life of the Vine and that since we are branches and He is the vine our fruit is the result of the life that exudes from the vine.  Then in verse seven, He makes a statement that far too often is taken as a stand-alone passage but must be viewed in the context of the whole – “If you abide in Me, and My words abide in you, ask WHATEVER you wish, and it will be done for you.”  (Emphasis mine).

This door to the miraculous is conditioned not only upon the context of the whole but hinges on the small word – ‘IF’.  The two facets of the “if” are abiding in Him, and His words abiding in us.  It is in light of drawing life from the Vine and producing fruit that He identifies that we are recipients of life and as living branches, we produce fruit because we are ABIDING IN HIM and His Words are ABIDING IN US.  That is the flow to us and from us. We receive of His life and as a result of that reception we produce fruit which produces seed which produces more fruit and the cycle is endless.  In that context, we can “Ask what we wish and receive answers to our prayers.”

Unfortunately, it would seem that too often we either are not abiding in Him and His words are not abiding in us to the level that He is our ALL-IN-ALL and we are living in a relatively casual, relationship rather than a totally committed life in which we “seek first the Kingdom of God and His Righteousness.”  In that condition, we neither expect that whatever we wish or pray to come to pass nor are we in a condition of heart to attain faith to receive.  Contrarily, if we are abiding in Him and His words are abiding in us His life will prod us to the level of life that we live in expectancy and become fulfillments of His promise that “the Works that He did we will do and greater works because He has gone to the Father.”  We will exhibit in this life the life of Jesus and through the fruit of that relationship, others will be positively impacted for the Kingdom.

The operative word is “IF”.  If we abide in Him.  If His words abide in us.  IF is the condition and the conduit through which the life that brings the faith for the miraculous.  Lord help me to change the “IF” to “I DO”.