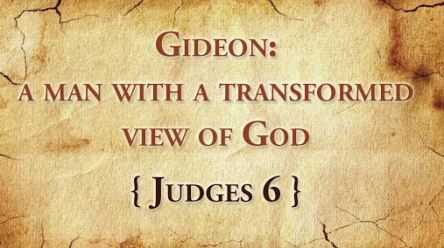 Judges 6:11-18 – “Then the angel of the LORD came and sat under the oak that was in Ophrah, which belonged to Joash the Abiezrite as his son Gideon was beating out wheat in the wine press in order to save it from the Midianites. 12 The angel of the LORD appeared to him and said to him, “The LORD is with you, O valiant warrior.” 13 Then Gideon said to him, “O my lord, if the LORD is with us, why then has all this happened to us? And where are all His miracles which our fathers told us about, saying, ‘Did not the LORD bring us up from Egypt?’ But now the LORD has abandoned us and given us into the hand of Midian.” 14 The LORD looked at him and said, ” Go in this your strength and deliver Israel from the hand of Midian. Have I not sent you?” 15 He said to Him, “O Lord, how shall I deliver Israel? Behold, my family is the least in Manasseh, and I am the youngest in my father’s house.” 16 But the LORD said to him, “Surely I will be with you, and you shall defeat Midian as one man.” 17 So Gideon said to Him, “If now I have found favor in Your sight, then show me a sign that it is You who speak with me. 18 “Please do not depart from here, until I come back to You, and bring out my offering and lay it before You.” And He said, “I will remain until you return.”  NASU

It is sometimes amusing but comforting to realize that God does not see as man sees.  He is not limited to what is presently visible or a current reality in the natural.  God sees the end from the beginning and we are limited to seeing the beginning from the end.  We may believe there is potential, but God not only believes the potential but sees it as a finished product, IF…  If what?  If we will walk in obedience and dare to dream and press toward the prize of the high calling.

In this account which is a most powerful revelation of the truth that “God sees in us what we cannot see in ourselves.”  I have known some who thought they were a god or God’s gift to the world, but my focus is the masses who do not view themselves that way.  I can only imagine how Gideon felt when the angel of the LORD came to him and called him a ‘valiant warrior.’  We don’t have to wonder because the account gives the mental attitude of Gideon.  Gideon did not simply shrink back in a sense of insufficiency, he questioned God.  That can be a dangerous condition but sometimes, it seems that God welcomes our questions.  Why?  Because it gives him the opportunity to demonstrate His power, person, purpose, and love.  It allows Him to demonstrate the truth that what He has placed in us can produce incredible results in this life.

Gideon asked, “if the LORD is with us THEN WHY???”  Why what?  Why are we in such deep turmoil nationally?  Why is there such calamity in our lives?  Why is there such unrest?  Why are the enemies enjoying such apparent success?  WHY?  He also asked, “if the LORD is with us THEN WHERE???”  Where what?  Where are all the miracles we’ve heard about in our history?  If the LORD brought us out to freedom from bondage, why has he apparently abandoned us?  I love the next verse.  It says, ‘The LORD looked at him…’  It did not say the angel of the LORD, it said THE LORD.  The LORD revealed what He saw in Gideon, which was something Gideon could not see in himself.  I have no doubt Gideon longed for Israel’s deliverance and for someone to champion the cause of Freedom for the people, but never saw himself as that vessel.  The LORD said, “Go in this your strength and deliver Israel…”  WOW!  Hey, Gideon, ITS IN YOU!  God has made you a conqueror, a valiant warrior, and a victory.  This is your assignment.  I AM WITH YOU!   Hallelujah!  That’s enough!

Gideon, as did Moses protested that he was insignificant and that’s what made him a candidate for God’s demonstration of incredible exploits through him.  Had he been full of himself and seen himself as larger than life, he would not have been usable for the King of Kings.  Had he not been humble and little in his own sight, he would have disobeyed when the LORD began sending home his warriors and left him with 300 men to face an entire army.  But, God saw in him a heart that was pliable, teachable, and humble.  That’s what God saw in David calling him a man after God’s own heart.  It was not that either of them was sinless or perfect, but they were obedient and recognized God as God.

God sees in you far more than you see in yourself and as Jeremiah declared, God knows the plans He has for you and it is far greater than you can imagine.  God knows His purpose and assignment for your life and it is not limited to the natural or immediate it is only limited by your willingness to walk in obedience.  I am not suggesting that each of us will become national leaders or deliverers.  Some of us may simply be those who pour water on the hands of those who are, but each assignment is vital and what God sees in you is far more than you see in yourself.  NEVER, and I plead NEVER limit your vision to what you think you can do.  Learn to listen to the voice of the Spirit of God and the Word of God.  God says that we are more than conquerors through Jesus.  All things are possible to those who believe.  Obedience is far better than sacrifice and if we are willing and obedient we will enjoy the fruit of His victory!

God bless you as you open your hearts to His Possibilities in your life!