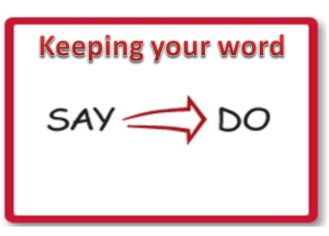 Ecclesiastes 5:4-5 – “When you make a vow to God, do not delay to pay it; For He has no pleasure in fools. Pay what you have vowed — 5 Better not to vow than to vow and not pay.” NKJV

In today’s world, a man’s word seems to be worth very little and that is a sad indictment of our society.  Politicians and Used Car Salesmen or two groups which are the brunt of many jokes about not being truthful.  It has often been said of both, “You know they are lying when their lips are moving.”  Having sold cars I never knowingly told anyone something that was not true and I know many others in the industry that had the integrity, to tell the truth.  Of course, I’ve known both politicians as well as salesmen that didn’t behave ethically, as have you.  But, to be honest I’ve known preachers that embellished the truth so often that you never knew when they were as one woman said to her pastor, “Pastor was that story true or were you just preaching?”  That is an incredibly sad thing to hear but unfortunately, it is sometimes the truth.

Why anyone would make a commitment to God, who knows all things at all times and then defer to fulfill it is beyond my comprehension.  God NEVER fails in His promises and if He says it then it is ABSOLUTE.  He expects nothing less from us.  Oh, He fully understands that we may find it difficult and even impossible to fulfill a commitment and in those cases, if we come to Him with a repentant and honest heart He will help us through that time and enable us to fulfill the commitment.

One thing I’ve seen too often is someone trying to bargain with God and bribe Him to do something that they desired.  They say, “God if you will do this, then I will do this.”  Then when God fulfills His part they realize that they have allowed their Elephant mouths to overload their peanut behinds and either cannot or do not want to keep their word.  In those cases, I would not want to be in their shoes!

Once when Jesus was being questioned about His authority to do what He did he used an interesting illustration found in Matt 21:28-31 – “”What do you think? There was a man who had two sons. He went to the first and said, ‘Son, go and work today in the vineyard.’  29 “‘I will not,’ he answered, but later he changed his mind and went.  30 “Then the father went to the other son and said the same thing. He answered, ‘I will, sir,’ but he did not go. 31 “Which of the two did what his father wanted?”  “The first,” they answered.” NIV

He emphasized doing the will of the Father far more than saying we will do something.  Words, in this case, are cheap, actions are powerful.  If I tell someone that I will do something, I endeavor with everything in my being and ability to do what I’ve promised.  If I find that I cannot, I humbly explain why I am, at that time, unable to fulfill my promise.  We’ve all had people tell us that they will do something and then it never happens and they never mention it and may even seek to avoid us as a result.  I’ve seen friendships destroyed, marriages damaged, business deals disintegrate, and churches split over that very thing.  What am I say, “If you give your word to God or man – KEEP IT!”  When you give your word you are giving your integrity!