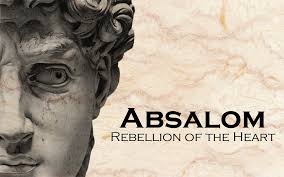 2 Samuel 15:1-4 – “In the course of time, Absalom provided himself with a chariot and horses and with fifty men to run ahead of him. 2 He would get up early and stand by the side of the road leading to the city gate. Whenever anyone came with a complaint to be placed before the king for a decision, Absalom would call out to him, “What town are you from?” He would answer, “Your servant is from one of the tribes of Israel.” 3 Then Absalom would say to him, “Look, your claims are valid and proper, but there is no representative of the king to hear you.” 4 And Absalom would add, “If only I were appointed judge in the land! Then everyone who has a complaint or case could come to me and I would see that he gets justice.”  NIV

Picking up where we left off yesterday let’s bring this to a conclusion and hopefully these three devotionals will have been of benefit to you and to others as you travel the pathway of life.

From the “Spirit of Revenge,” we transition or evolve into a “Spirit of Selfishness,” which in my opinion is a basic “Root of Sin.”  It is the catalyst that sends us headlong down the slope of destruction and results in many being defiled.

Proverbs 16:2 – “All the ways of a man are clean in his own sight, but the Lord weighs the motives…”

Note the progression.  Absalom is brought back to the Kingdom of David after three years of exile but given no audience with the King for TWO FULL YEARS.  He has no remorse for his actions.  He is so filled with hatred, vengeance, and self that he sees only HIS OWN AGENDA!  He is rapidly reaching the point of no return.  He has already learned to permit hatred to have its full vent.  He has already developed an intense lack of respect for authority and he has tasted apparent victory through his rebellion in the burning of Joab’s Field.

Hatred, bitterness, vengeance, selfishness all produce Self Righteousness.”  This, in turn, produces a “Superiority Complex” in the heart and drives the carnal man to believe that: He should be number one because he is better, more capable than or at least as capable as those in authority and that produces two spirits.

The Self Exalting Spirit.

Get into his head.  He is thinking, “I handled that rascal Amnon, when the King failed and I could handle all the problems of the land, but the King continues to fail.  All would be well if I were King.”

The Spirit of Deception.

2 Samuel 15:3 – Absalom’s supposed interest in the people’s problems and needs brings him to plant the seed in the minds of the subjects “maybe the King isn’t as interest in us as he should be, but Absalom is.”

We are told in the story that Absalom would sit in the Gate and ask questions that seemed harmless and seemed to express genuine interest in people but they were extremely troubling and bring alarm to my spirit.  He would shout to the people, “What village are you from?”  “What tribe are you?”  He had an agenda and it was his motivation.

The questions seemed harmless but the reason he was asking is troubling.  He had his own agenda and wanted to find out where the people were in their thinking so he could speak things into their “thought processes” that would cause them to look favorable upon him and his cause.  On the surface he appeared to be on the side of the King and Right.  Please understand that he carefully hid his plan and would never openly discuss it with anyone.  There was a “Spirit of Deceptiveness” in him.

It is here that I feel that I need to give a warning about the “Absalom Spirit”.  I don’t know exactly how it applies to everyone but I know it does and to some in particular.  I know that this spirit NEVER manifests itself upfront immediately.  It comes in a very deceptive manner and initially it appears to be helpful and expresses concern about your condition, position, and problems.  It sounds sincere and valid but it is diabolical.  If you encounter the “Absalom Spirit” you can easily be drawn into rebellion and find yourself involved in something that God NEVER INTENDED.  If you allow an “Absalom Spirit” to develop in your heart you will ultimately find yourself facing the judgment of God severely and quickly.

I want to conclude with a prayer:

“Lord, I pray now for each person reading this that you will protect them from deception.  I sense in my heart that we are near a time of the birthing of something new and special in God and a time of visitation from the Lord.  I believe that breakthrough and breakout is coming in the lives of your people so I ask that you give revelation to each heart and allow each one to recognize and know any “Absalom Spirit’ that comes into their life in any fashion and enable them to biblically and correctly respond to that spirit.  In the name of Jesus I pray.  Amen.”